American trucks like the Ram, the Chevy Silverado, and the iconic Ford F-150 make up what we can call the Holy Trinity of trucks in the U.S.A.

Every year, the three contend with each other to outsell and out perform.  The heavy competition within the U.S. border makes it so that the end product gets better and better for customers.  It’s essentially a win-win for us!

In the next couple of years here, we should see all three of the big boys redesigning their trucks as they take subtle stabs at each other.  Entertaining.

Today, we’re talking about the Ram; The 2018 Ram 1500.  The truck has been on sale for a number of years and has been through the (slight) separation of Ram and Chrysler/Dodge.

Interestingly enough, Ram is planning on having the 2018 Ram 1500 overlap sales/production with the current model.  This may sound odd, but FCA is known to do this sort of thing.

Between the Pacifica and Grand Caravan as well as other Jeep’s, It’s an odd practice, but FCA likes to overlap. I’m not sure how they benefit, but what do I know?

On the Ram 1500, we will continue to see the steel construction of the truck, even though the industry seems to be favoring and moving toward aluminum.   Staying with steel is classical, and allows Ram to design the truck more extensively; Given how sturdy the material is.

Some sources point to the 2018 Ram 1500 being more of a refresh, over a redesign.  This is to spice up the truck, but not completely redo it.  Interesting direction there.

Without further a do:

The exterior of the 2018 Ram 1500 will be more of a mid-cycle refresh than a total redesign.  Like I said before.

The headlights in the spy shots indicate that they will be more integrated into the grille, like we see as almost an industry trend out there.  The hood of the 2018 Ram 1500 will also be bigger and raised up to give a more muscular tone to the front of the truck.  Which is a good look for  vehicle called the Ram.

The grille is big and as imposing as it has always been, and we can even bet on seeing the return of that cross-hair design we saw on the previous trucks.  This will be an interesting spectacle, and should look cool if done right.

Along with the stronger grille and bolder hood, we could see some more air ducts in the hood and bumper to add to the menacing look.  Ram’s have always looked the most capable and aggressive out of the trucks on the market, so this is great.

Ram designed the headlights (according to the spy shots) to be more pointed and snarly, and feature new LED signatures.

The tail end of the truck will also see a redesign, featuring new LED signatures and a new shape that looks oddly a lot like the current Chevrolet Silverado, or GMC Sierra.  I do hope they change that up a bit because otherwise, it’s a great look.

I do hope that the 2018 Ram 1500 keeps the cool dual exhaust tips we’ve seen on current trucks.  That might be more of a personal preference, but I think it looks great.

There is also speculation that the 2018 Ram will feature longer truck beds in every trim level, which is good news unless you have a very small garage. 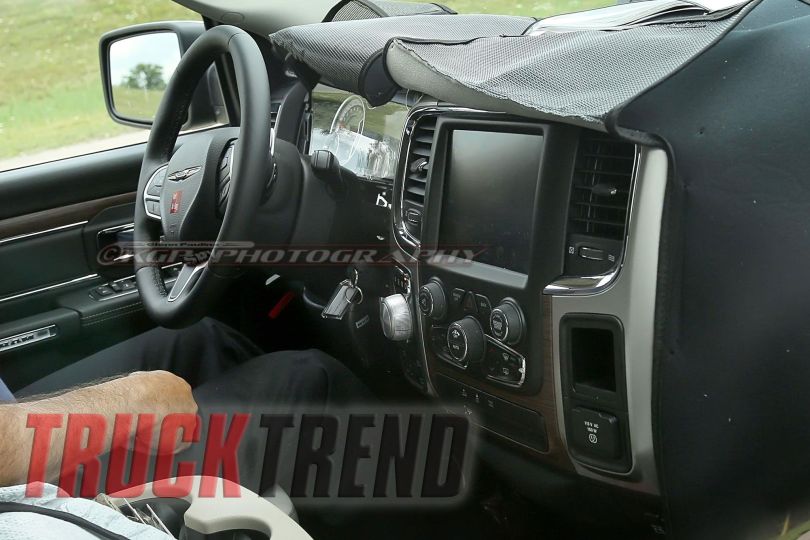 Form a broad perspective, the interior of the 2018 Ram 1500 will be pretty much exactly like the current model.  But that’s if we only take these spy shots into account.

The inside features a big navigation screen, cleanly laid out climate control and a lot of Chrysler styled buttons and knobs.  If you know FCA styling, you’ll see what I mean.

Everything inside is big and chunky.  Yes, those two words are pretty much the same but that’s okay.

I cannot stand that turn dial transmission thing though.  I really can’t.  It has the same objective as the classic shifter that was on the steering wheel assembly (clearing up space in the center console).  There was nothing wrong with the stalk coming out of the steering wheel, and the dial makes things so much less dramatic.

The performance and capabilities of a new truck are what it is really all about.

Ram’s new 1500 will be made up of steel, like we said before.   This will increase the weight of the truck, but expect the added weight not to really bog things down.

The Pentastar 3.6 L V6 will be standard, and a 5.7 L V8 will be optional up the range.  There is a possibility that Ram could be strapping a turbocharger to the 5.7 L ridiculousness, but that is yet to be confirmed.

The 2018 Ram 1500 will be a fresh new face for the line up, and hopefully spur some sales.  The power and capability will be there, so there’s no worry.