All “super-beetle” jokes aside, the Porsche 911 is just getting crazier and crazier.

The evolution of the 911 through history (and it has a lot) has taken a lot of turns and forms, but it has generally been an incredible GT car, sports car, track weapon and others.

I love the 911, and I think it has an endlessly significant place in automotive history.

In the most recent adaptions, Porsche really busted out the track editions stronger than ever.  We’ve seen GT3’s for a while, and GT2’s are more rare.

For 2018, Porsche is bringing both models back with some changes and important differences over their older brothers in the past.

The GT3 adds in a manual option for the pure drivers out there, as well as the PDK dual-clutch transmission for lightning fast shifting.  Perfect for the track.

On the other hand, we have the return of the Porsche 911 GT2 RS.

The 2018 Porsche 911 GT2 RS made itself very open and well-known at this years Goodwood Festival of Speed.  It is plain and simple the most powerful 911 ever to hit the roads.  How powerful?

We’re talking about a twin-turbo 3.8 liter flat six engine that produces 700 horsepower and 553 pound feet of torque.  That is just insane by any measure.

Porsche says the 911 GT2 RS will do a zero to sixty in around 2.7 seconds.  Past that, the top speed the car will do is 211 miles per hour.  Just more insanity for you.

When we compare this new car versus the last generation 911 GT2 RS from 2011, things are naturally better.

The power boost over the 911 Turbo S (which was already an insanely fast car) is thanks to a new cooling system and larger turbochargers that push more air into the engine.

On top of that, the new chassis is made to take rear-wheel steering which will definitely help when the GT2 RS is pushed to its limits.  We see a lot of manufactures jumping on the rear wheel steering game, and its really making a difference in driving the cars.

Not to mention there are larger intakes, a larger wing, ceramic brakes, lighter components all the way around and better aerodynamics.

Just like the 918 Spyder, you can opt for a Weissach package.  It is a whopping $31,000 and you get a carbon roof, carbon anti-roll bars and magnesium wheels. 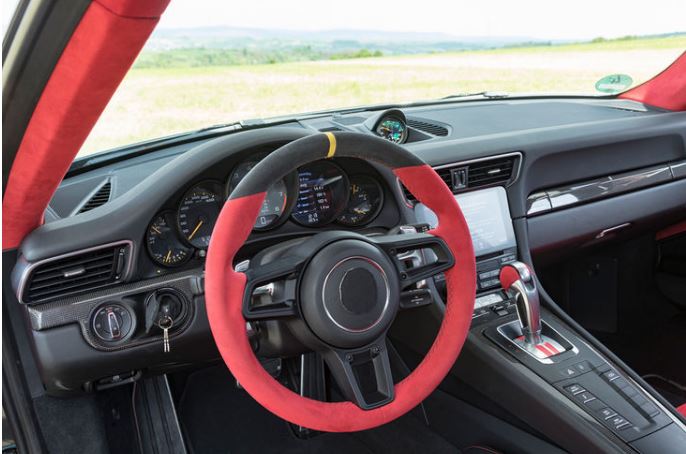 The interior of most 911’s and really Porsche for that matter is a familiar place.

Inside the 911 GT2 RS, you’ll find pretty much everything you’d expect in a 911, which is fine.  Obviously since this is the performance version, you get less goodies and more hard core looking red bits.

The interiors of high performance cars are never really a point I worry too much about.  I do think that manufactures should honestly spend too much time on how they look, over how well the get the job done.

In Porsche’s case, they consistently get the mark right on.

Driving position, ergonomics, and connectivity to the car matter endlessly in a car like this and Porsche is great at what they do.  Lots of carbon fiber, too.

You can also get the Chrono package, which allows you to save, view, and evaluate lap times on the center display.  Very cool stuff.

Pricing will start just around $293,000 for the 2018 Porsche 911 GT2 RS.  I can’t help but imagine that the prices in the second hand market will sky rocket to probably double that.  It always seems to do that.  Doesn’t it?

I love the new 2018 Porsche 911 GT2 RS.  The car looks insane and will definitely drive insane.