In the world of 4×4’s, you’d be hard pressed to find a more legendary and well-known vehicle than the Jeep Wrangler.  The vehicle has been around and thriving since the 1940’s and conquered every terrain it finds itself on.  I recently did a review on the Jeep Wrangler Unlimited you can check out here.

But today, we’re talking about the latest.  The 2018 Jeep Wrangler.  One of the first things you realize when building your own Wrangler is the fact that there are a billion options and trims and everything in between you can put on your Jeep Wrangler.  Which definitely makes things complicated, but that is what people love about the Wrangler.  From a drivers perspective, they don’t drive incredibly well and the steering has no feeling in it whatsoever.  But that’s not why people buy Jeep Wranglers.  People buy Jeep Wranglers because of their off-road capabilities, their curb appeal and to own a wrangler.  As a car, they’re not the best either because the wind and road noise is pretty ridiculous, the acoustics in the cabin are bad, it’s not very comfortable or really livable. 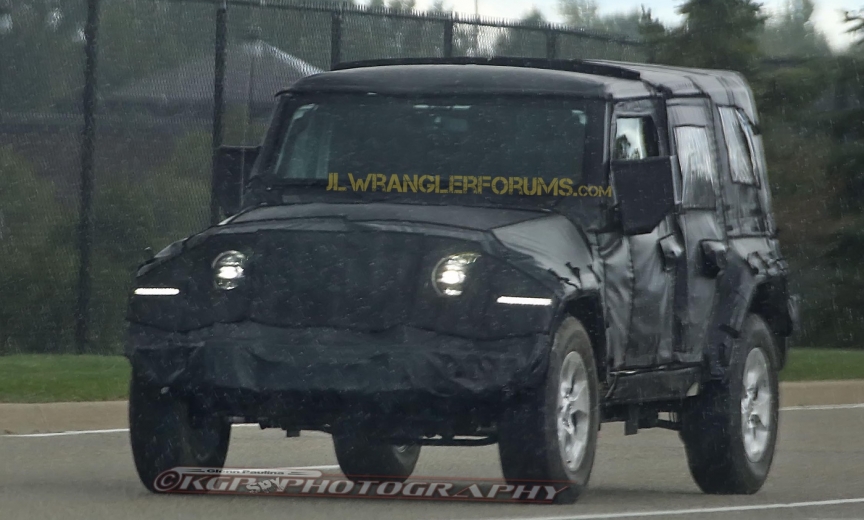 Here’s a fun fact, : a 2018 Jeep Wrangler actually was found on the side of the road. But past that, Jeep clearly doesn’t want you to know too much about the 2018 Jeep Wrangler. But with the lights on, we can tell some interesting features on Jeeps most iconic model. For example, those LED running lights that look like they’re on the fenders and the headlights look like they’re using a much brighter bulb or diode.

From that spy shot, some creative people on the internet made the rendering you see above.  This rendering of the Jeep Wrangler Unlimited features those same light kits I mentioned above and doesn’t seem to really change up the original formula for the Wrangler.  So given this, don’t expect a huge redesign for 2018, expect a refresh of the classic Wrangler.  Remember everyone, if it’s not broken; Don’t fix it…At least not too much.

I’m not sure what kind of super futuristic craziness you were expecting, but it’s literally a Wrangler.  Then only difference I can find is the new gear lever in the center of the cabin and that’s it.  There also appears to be a slightly digital dashboard, but that’s all.  Again I hope this doesn’t let you down, but again guys: If it isn’t broken, don’t fix it.

I don’t see anything wrong with the interior, I just think it’s a bit outdated.  But why do I matter?  It’s a Wrangler!  People love these things for reasons I can’t necessarily grasp and that’s okay.  Unless I lived in the desert or mountains I can’t say I would buy one, but if you love them, more power to you.

A diesel is coming.  Sorry to be blunt, but there will be a JL Jeep Wrangler, and it will have a 3.0L V6 like the RAM Ecodiesel.  We’re looking at an output of 240HP and a whopping 420 Lb-Ft of torque.  That is really impressive for a turbo diesel.  you can also be on the look out for the a mild-hybrid option.  In 2022, that mild hybrid should be turning into a full hybrid Jeep Wrangler.  Also, a turbocharged four cylinder is being produced for a possible base engine.  But don’t worry, it should have about 300 HP for you to enjoy.  The 6-speed manual transmission will be living on in the 2018 Jeep Wrangler as well.  Another key point to help the new Wrangler move with the times is the fact it is getting some aluminum body work as well, in place of steel to save weight.  Expect the suspension to remain the same also, favoring fixed front and rear axles over independent suspension.  Lots of classic Wrangler DNA is still alive.

There is a lot of excitement around the 2018 Jeep Wrangler, and we’re expecting a release date around Fall 2017 and for the Wrangler to be featured at the L.A. Auto Show.  Part of me wishes they would fix some of the driving dynamics, but I feel like it would take away from the character of the vehicle.  And when talking about a vehicle as instantly recognizable as the Jeep Wrangler, character is what made the thing as popular as it is, and what keeps it selling.  Everyone loves a Jeep Wrangler, myself included.  There is just something about them so special, that you really don’t need to redesign it completely to boost sales.  Just slap some 40 inch tires on it and take it in the sand (If that’s what you’re supposed to do…I don’t know).  The engines will be phenomenal and I’m sure the turbo diesel will pull through anything.  We’ll all be able to rejoice this fall when the 2018 Jeep Wrangler finally comes to life.