For as long as I can remember, the Honda CRV has had a definitive place in Honda’s line up and has been a strong staple for sales.  The Honda CRV hasn’t really had a bad generation, which allowed the small SUV to build up a good reputation in the market.  People love the Honda CRV.

While the Honda CRV hasn’t really been exciting or breathtaking in its life span, the popular SUV always gets a good refreshing every couple of years to keep customers coming back.

For 2018, the Honda CRV is getting a fresh face, and it is just as solid of a choice as it ever has been.

As Honda’s vehicles grow and age, it becomes more and more apparent that Honda takes tips from their own luxury division, Acura.  The 2018 Honda CRV boasts an all-new design language that makes it sharper than ever.

This new design language is geared toward bringing in new, younger buyers.  Honda adopted its Acura language and it seems to be working in the 2018 Honda CRV.  Hopefully, the SUV continues being one of the best money can buy.

The new 2018 Honda CRV adopts the face that Honda seems to be pasting on other vehicles in the line up as well.  The result is a new focused, sharper look with harder angles than the previous generation.

The proportions overall have shrunken a bit from the last model, and the 2018 Honda CRV looks more like an Acura than a Honda.

The front end now features dimples on the outside of the bumper as well.

On the side of the 2018 Honda CRV, things are not really changed, but still appealing.  The passenger cell and roof line sit further back on the SUV, making the silhouette more attractive.

The roof line on the 2018 Honda CRV is much more sleek and makes the SUV look less top heavy than previous versions.  Given that SUV’s usually have a tall roof line to accommodate the tall rear end, having a more aerodynamic roof looks a lot better.  Plus I’m sure it moderately helps fuel economy.

The 2018 Honda CRV does a great job of keeping things practical while looking sharp and dynamic. 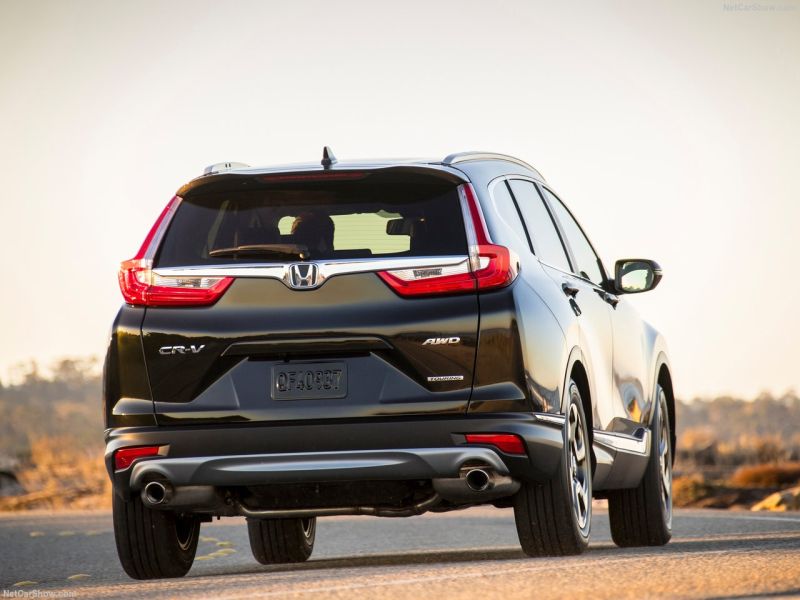 From the rear, the 2018 Honda CRV continues to look more athletic.  The redesigned tail lights are more complex and intrusive than before.  The lamps feature edges and bumps that bring the whole design to a more complete face and structured focal point.

The 2018 Honda CRV takes a much more conservative approach in its design than the Honda Accord, but it looks good doing it.  The Accord is much more edgy and daring, while the CRV knows its place as a practical SUV.

Overall, the 2018 Honda CRV looks to be a great evolution to one of Honda’s best sellers.

The interior of the 2018 Honda CRV is very sharp.  Honda has been putting their own flavor on the whole tablet-screen fad which makes it look unique.  The whole design is easy on the eyes.

The only real bother I have about the interior of the 2018 Honda CRV is the whole fighter jet styled gauge cluster.

You can think of the 2018 Honda CRV as a big Civic.  The layout is simple and each material works well with each other, so it doesn’t look cheap.

I’m happy that Honda didn’t employ the dual-screen layout that we see in Acura’s cars.  While that system looks cool, it is not intuitive and just complicates the whole car.

Five adults can fit inside the 2018 Honda CRV comfortably.  The combination of functionality and style is great.

The interior of the 2018 Honda CRV is pretty similar to the previous generations, but the update is well needed.

Through the battle of keeping up with technology, Honda fairs well.

Honda offers a third row seat as well for the 2018 Honda CRV.  This helps bridge the gap between the CRV and the Pilot.

Overall, I like the design of the interior.  Nothing over the top; professional stuff.

Since the 2018 Honda CRV is based on the Civic, there will be similar engine options to the Civic.

Base models should feature Honda’s 1.5 L turbo four cylinder that can pack 174 horsepower.  While the Civic will see a 6 speed manual coming to its line up, the CRV will only offer an automatic assembly.

Because the refreshed Honda CRV is a bit heavier than the Civic, there will be an emphasis on low-end torque to help the Honda CRV along.

Honda is planning on launching with a hybrid option as well.  A similar system to what we could see in the CRV is currently in the Accord, and that gets 49 MPG on the highway and 47 in the city.

The 2018 Honda CRV will be adopting this impressive technology.

The 2018 Honda CRV is a new generation of one of the best SUV’s out there.  The whole vehicle is slimmed down and more assertive, but the original formula is still alive.