Audi has been around for many, many years.  Even though Audi is a very instantly-recognizable company with plenty of history, they’ve done great things in recent years.

Even though Audi makes some of the most plain looking, dull machines (which their customers love) the brand has achieved greatness.

Audi has made luxury sedans and SUV’s along with the TT and A5 two door’s for as long as they’ve been a thing.  This is the case with most luxury automobile manufactures for the time being.  Audi makes cars for their luxury, appeal and function largely.

In 2008 though, Audi really switched things up and created the R8, which completely revolutionized the whole brand.

Luxury car manufactures don’t really venture into super car territory, as they are usually stuck in their classical ways which is totally fine.

But Audi created a super car that is still in production today, and winning hearts everywhere.  We’ve seen Lexus try with the LFA that was actually a huge success for the brand and it produced a fantastic super car.

It is really unheard of to have a passenger car brand create a super car that is actually comparable with the big boys like Ferrari, Lamborghini and other makes that you would  never otherwise associate an Audi with.

While honestly I’m not the biggest Audi fan, I can’t deny that they make incredible vehicles that if I didn’t respect, I would just be dumb.

Others have tried and tasted short-lived success, but Audi kept going and still makes the fantastic R8 today.

Today however, we will be talking about a vehicle that Audi has made for just over five years.  The Audi A7 is an impressive car as well, and combines a hatchback model with the conventional sedan.  This makes for a beautiful sloped roof line and huge practicality with the space in the trunk.

The 2017 Audi A7 was largely the same we’ve seen over the years since 2012 and with mild plastic surgery here and there.  But in the next year or two, Audi has hinted (and people spied) at a possible redesign.

Audi hasn’t exactly released everything (or any for that matter) about the new car, which is totally fine since they like to be secretive about things.

Anyway the German’s decide to spin it, we’ll be looking at something very Audi as usual.

For years we’ve seen Audi style their cars the same.  All of them.  I know that there are people out there who will defend this type of styling and it is something we see from a number of foreign manufactures, but Audi does things to the extreme.

Personally, I want my expensive car to look expensive, and the 2018 Audi A7 looks to be the filler for that.  It isn’t overbearing, but it is very sharp and has a strong road presence.  People know the Audi A7 and no other Audi models.

There are some spy shots of the 2018 Audi A7 redesign, so we can examine them and see where the new model is headed. 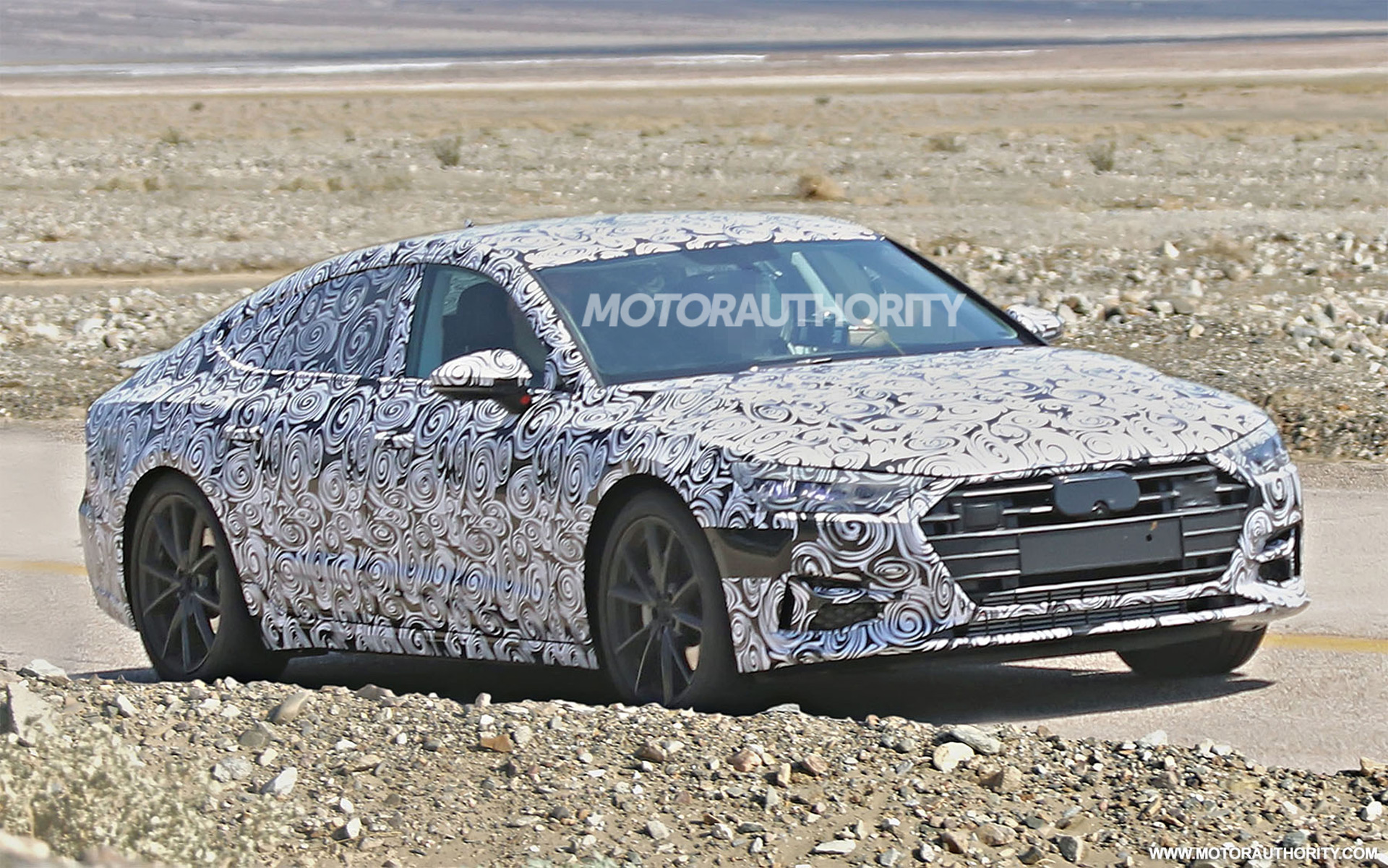 As I said, the exterior of every Audi for a number of years have been spitting images of each other.

On top of that, they are pretty much the epitome of reclusive or dialed-back luxury in the design front.  I’m more one for more daring designs, so Audi doesn’t win with me personally.  But, I do know of a ton of people who love the sharp angles and under-the-radar appeal of Audi’s model.  And there’s nothing wrong with that.

As far as Audi is concerned, the A7 is actually a pretty ambitious scheme.  It’s essentially a hatchback sedan with a beautifully sloped roof line (that has a nature to intrude on interior space) and plenty of cargo space.

Since the A7 was made, it was a strong staple in the Audi lineup.  Along with the more normal sedans they have, the A7 stands out beautifully in every trim level.

Audi offers the A7 in multiple trims like the S7 (not to be confused with the Saleen S7, which I think is much cooler) and the RS7.

The Audi Sport offerings I mentioned above dial everything to 11, and really stretch what the A7 platform is capable of.  Plus they look awesome.

As with the whole line up, the front end of the A7 will be very Audi looking.   Sharp angles, big grille and strong stance.

The redesign we see here in the spy shots and renderings has a couple notable changes and updates to it.

The grille looks ever more wide, and the front bumper and head light assembly seems lower than the previous and current Audi A7.

Based on the renderings people on the internet have been kind enough to run for our eyes, the front end of the 2018 Audi A7 looks softer and not as immediately aggressive as what we’ve seen before.

This is largely due to the reduced size of the air ducts on the side of the bumper, the more contemporary grille and the less-shaped headlights compared to the previous car.

Past the front, the new car looks largely like the previous one for now.  The side view features an identical roof line that is sharp and nice to look at.

2018’s Audi A7 is much harder to tell from the back.  You can see the tail lights have been reworked and redesigned which is nice.

You still get that awesome active aero wing that deploys at a certain speed (I think around 70 MPH…Correct me if I’m wrong) and I always liked that.

Past that it is very hard to tell anything more.  The car is far along in the production design and should be unveiled sometime soon, but the camo is thick on the test mule, so we turn to artist renderings.

Audi’s interiors have aged and developed around and inside (literally) the Audi A7.

In the end, Audi has made the current Audi A7 interior a lovely place full of well-appointed leather and wood trim that has everything you could possibly need or want in a car.

Nearly nothing is known about the new 2018 Audi A7 that is coming out in the next year, so we have to focus on the current model to try and draw some sort of conclusion here.

Jumping inside the current Audi A7 is an interesting event and I much enjoyed it when I drove one a little over a year ago.

You get in and immediately know its a special car.  The leather is soft and plentiful, and the wood inlays are just something of beauty.

Usually when you buy a car with wood inserts, you get some sort of coated plasticy looking surface colored like wood and it just looks like wood.  It doesn’t actually feel like real wood.

Things are different in the Audi A7.  Instead of plastic-like wood inserts that just add a visual appeal, you get (what feels like) actual, imperfect wood.

When you run your hand across the door panel, you can feel the character of the wood.  All of the imperfections, crevasses, holes and bumps are present and it brings a natural feeling to the cabin.

The leather on the other hand, is of typical Audi quality and prowess. The scent of soft, plush leather radiates inside the car.

New for 2017, Audi introduces some safety features that make the whole car relevant, even as it is due for an update.  I can imagine these technologies will be present on the new car when it comes around, so I bring them up now.

You get lane departure warning, forward collision mitigation, blind spot monitoring, adaptive cruise control and more.  Audi is very far ahead when it comes to autonomous driving technologies as well.

I do have an issue though that I do hope Audi fixes before they release the new 2018 Audi A7.  And that is the dismal auto start/stop feature on the engine.

The technology is supposed to cut off the engines operation for improved fuel economy and whatnot, but the system in the current A7 is just bleh.

Building off of my last sentence, the 2017 Audi A7’s start/stop function was so intrusive it made it feel like the car was broken.

As I drove along, I would slow to a stop and before I could even come to a full stop the system would shut down the engine, bringing the car to an abrupt and scary stop.

I tested the reaction a bit, and the A7 would shut off the engine at four miles per hour at some points.  I’m still moving.  There’s no way that’s good for the engine.

In most cases, the start/stop function is a very clever one and can do a fair job of saving gas and being more efficient. I do hope that Audi fixes the issues with the system because other wise the car is largely flawless, as long as you don’t sit in the back and you’re not super tall.

We should see similar power plants in the new car versus the old car as well.  The 2018 Audi A7 should feature a 3.0 L supercharged V6 that can produce 333 to 340 horse power.

Audi features a sport mode in the 2018 Audi A7 that changes the driving dynamics to improve throttle response, suspension, steering weight and other features.

Audi also has the competition package which should make a return for the 2018 model year that will bump power to that 340 HP mark.  Nothing too insane, but it is noticeable over the standard car.  Think Ferrari’s F430 and 430 Scuderia.

As for the crazy trim levels above the A7 like S7 and RS7, there are no details as of right now.  We barely know anything about the 2018 A7 as it is.  But we can make an inference from the previous car about what to expect.

More power, less weight, and better handling capabilities.  For the most part, that sums up what we will see out of the S7 and RS7.

While I’ve never really been particularly crazy over Audi as a whole, they’ve done some truly amazing things.  I can’t deny that R8 at all, and the A7 is in a class of its own.

The 2018 Audi A7 will have some big shoes to fill, but it looks like it will fill the void nicely.  I do wish it looked more assertive, but that’s Audi for you.

There is no definitive release date just yet for the 2018 Audi A7, but we can shoot for something around late 2017.