The Nissan Pathfinder has always been more along the lines of being in the background of Nissan’s lineup.  The three-row cross over has gotten a bit of a redesign for 2017, and it looks pretty good.

While this new car is not a complete redesign, the new car has a ton of better features going for it.  For example, it is safer, more powerful and more rugged than before.

These new changes will keep the new Nissan Pathfinder for 2017 a fresh face in front of the changing competitors.  Between the Honda Pilot, Toyota Highlander and Ford Explorer, The 2017 Nissan Pathfinder definitely has its work cut out for itself.

There are some impressive feats that the Pathfinder is making to stay competitive.  It still has a big engine, but gets great fuel economy.  That in itself is an art.

Along with the engine upgrades, the 2017 Nissan Pathfinder gets a whole bunch of steering and suspension tuning trickery to help with driving dynamics.

Perhaps one of the more interesting facts is that the 2017 Nissan Pathfinder will not be getting a hybrid option for now.  Today, that is pretty uncharacteristic of SUV’s.  Usually we see a hybrid along side the launch version.  But as for the Nissan Pathfinder, we will have to wait.

There are a number of other cool features on the new 2017 Nissan Pathfinder.  This makes me happy, because the SUV has always been somewhat of an oddball.

The first thing I notice when I look at the face of the 2017 Nissan Pathfinder are the head lights/grille.  The assembly almost looks like a Ford Explorer in a twisted way.

But you see the Nissan Pathfinder, along with plenty of other SUV’s, are getting more mature.  The much more angular and tech-styled front end is professional.

Previously, the Nissan Pathfinder was one of the most confusing things to look at.  The front end was bubbly but the grille and lights were sharp.  Toward the back it was still bubbly, and the rear doors had vertical handles.  It makes me happy that the new 2017 Pathfinder is much more cohesive.

While for the longest time, Nissan’s line up has been unexciting (save for two models…) the new Pathfinder is a good step.

Previous Nissan Pathfinders were able to go off-road and hold their own.  The new Pathfinder is not made for that, as Nissan went a different direction. 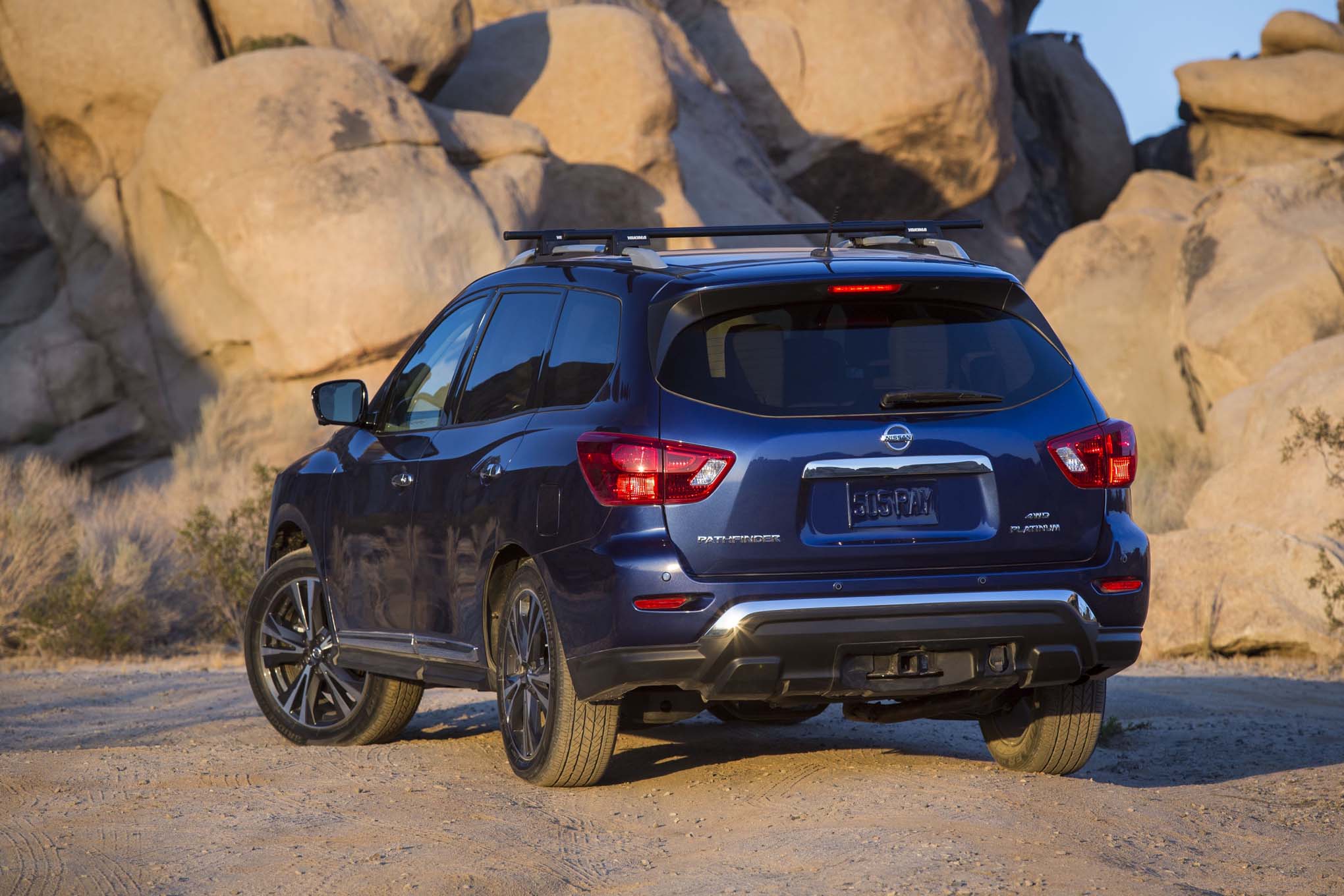 The rear of the Nissan Pathfinder is great.  It is undeniably a Nissan model and still looks like it could enjoy some mud.  Could you call that DNA? Probably not, but it’s a great capable look.

It is big, but it does have the lines and muscle to be visually appealing.  Good job, Nissan.

This is where I do have to draw a small line in the sand.  Nissan has some of the most unconvincing interiors out there, unfortunately.

Every bit inside of the 2017 Nissan Pathfinder needs an update, and it’s barely been released.  There are a ton of buttons and switches on the center console that is just not with 2017.

Bits and pieces look straight from other cars and like they’ve been kind of tossed together.  I’ve seen plenty of angles and from each one it just looks like it could’ve been so much better.

I feel like a broken record, but interiors in cars are one of the most competitive features.  Being instantly turned off or on for a car purchase can be done just by sitting inside.

The exterior of the 2017 Nissan Pathfinder is sharp.  It just is not matched by the interior.  It’s truthfully sad to see.

Now you may actually like the interior if you’re among simple folk, but I like things that look like they’re from the time period they are made.

You can squeeze in 7 passengers inside the 2017 Nissan Pathfinder very comfortably.  I just hope we see an update soon.

Nissan completed an impressive feat with the new 2017 Nissan Pathfinder.  While the interior is the vehicles downfall, the engine sees some light.

New components include direct injection, a new intake manifold, new pistons and a new compression ratio.  The new engine is also lighter than the previous one, with a new aluminum block.

This new 3.5 L V6 will be expected to be seen in other Nissan models as well.

Now, usually when you add power, you sacrifice fuel economy.  Luckily in the 2017 Nissan Pathfinder, you don’t have to worry about that.  Even with a new, more powerful engine, MPG ratings remain the same.  You can expect 27 miles per gallon on the highway and 20 MPG in the city.  As for all-wheel-drive models, mileage will be 26 on the highway and 19 in the city.

As I mentioned before, Nissan reworked the steering and suspension inside the 2017 Nissan Pathfinder for a better driving experience.

The front and rear shock absorbers are now stiffer and the spring rates are increased by a noticeable 25 percent.

The steering ratio has been improved by 11 percent so that the car reacts more responsively.

I am legitimately impressed by what Nissan has done with the 2017 Nissan Pathfinder.  However, the interior continues to let me down a little bit.

The 2017 Nissan Pathfinder looks promising.  The only downside is the interior, which is hard to accomplish. It drives great, looks great and has room for everyone.

The vehicle is in a competitive place, and the new face and positioning of the Pathfinder is really helping to find its path (I had to).

I do wish Nissan would reconsider who designs their interiors though…