Since there is such a big disparity in personality within the same company, that leads to some questionable results.

I hardly know where to begin the the Nissan Juke, besides the fact that I’m surprised it is still in production.

The 2017 Nissan Juke kind of has its own charm.  The Nissan Juke is so unique and off-the-grid of normal SUV’s that it just may be a classic one day.

While the Nissan Juke is a stubby looking thing, it is fun.  Think of it in a similar category of fun-but-passable as the Toyota FJ Cruiser.  Then it kind of makes sense.

The 2017 Nissan Juke is kind of like a novelty Nerf gun.  But slightly more practical to drive. 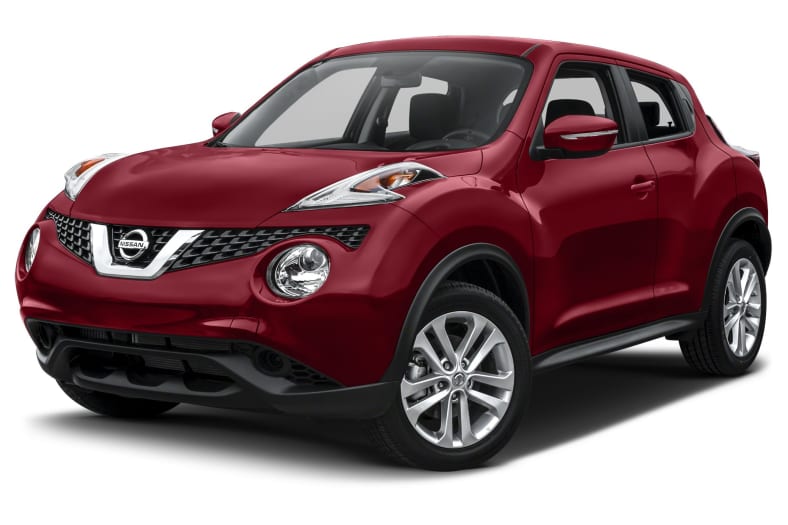 The 2017 Nissan Juke comes in five trim levels.  The trims include S, SV, Nismo and Nismo RS.  There is also a Nismo R we will talk about briefly.

While Nissan is a manufacture that makes little else than normal looking cars, Nissan made the Juke as weird as possible.

In the front, the Juke looks like some sort of bug with eyebrows.  The 2017 Nissan Juke’s whole appeal is about how weird it looks front to back.

The side profile of the 2017 Nissan Juke is a stubby and curvy land scape that would only make sense on the Juke.  It has four doors, but hides the rear doors by putting the handle in the window pillar.  We’ve seen this sort of thing before, but it really makes the 2017 Nissan Juke look like a two door SUV.  Again, this only makes sense on the Juke.

From the rear, the 2017 Nissan Juke continues its quirky nature.  The tail lights don’t exactly look integrated into the design but again, it’s all in the charm.

On the Nismo models, you get some sort of a rear diffusor that adds to the confusion.  Even so, the passenger cell is much narrower than the wide fenders on the 2017 Nissan Juke, which makes it look somewhat cool from the back.

It takes a certain kind of person to drive and buy a 2017 Nissan Juke, and that person is usually the person who never stops talking and can be found at karaoke night.

The interior of the 2017 Nissan Juke is a bit behind its time, but you forgive it once you see it.

Things inside are very circular and rounded.  The center stack has curved edges that work very well to compliment the cue.

Nissan says the center console is inspired by motorcycles…I’m not sure what that means but it looks super cool.

The fundamentals are all there, and things are pretty basic otherwise.

For the 2017 Juke Nismo, the steering wheel is coated in suede and has a red position indicator at the 12 o’clock spot.  While this might sound very out of place on a 2017 Nissan Juke,  but the interior wears this interesting touch nicely.

Also, you get suede seats and black chrome trim around certain units on the inside as well.

5 passengers will fit inside the 2017 Nissan Juke can seat five adults in…slight comfort.

If you’re a lunatic and have around $700,000 laying around, Nissan made something called the Juke R.

In simple terms, the Juke R is a Nissan GTR with a Juke’s body.  If that sounds insane to you, you’re right.

There are only a couple Juke R’s on earth.  While that begs the question “Why?”, they were made to see if there was a market for performance oriented Nissan Juke’s.

With the release of the 2017 Nissan Juke Nismo and Juke Nismo RS, it seems that the market was there…Somehow.

The standard 2017 Nissan Juke gets great fuel economy as well, 32 on the highway and 28 in the city.  This is all thanks to its modest engine.  Obviously, the Nissan Juke R doesn’t really get that kind of efficiency.

The 2017 Nissan Juke is one of those vehicles that puts a smile on your face when you drive it since it is so weird.  Hopefully, it sticks around.

A release date for the 2017 Nissan Juke will be known later on this year.