The Volkswagen Golf is a legend of the hatchbacks.  That is an undisputed fact.  Move up the range and you have an even more legendary Golf GTi that in its current generation, can impress any motorist with its big power in a small package.  I absolutely love the GTi, and I even regret not getting one when I was considering.  The engineering is perfect in that car.  Shifting is fast (in the DSG), steering is precise, suspension is tight but forgiving, it’s perfect.  I always tell everyone who is considering one, “If the GTi is on your list, get it.”

Move even further up in the world of the Golf, and you get the 2017 Golf R.  This is as serious as the Golf gets.  It is conservatively designed (if you take into account its competitors) and packs just as big of a punch.  If not, harder.  While it is strong, it doesn’t look as powerful as it is.  Wolf in sheep’s clothing? 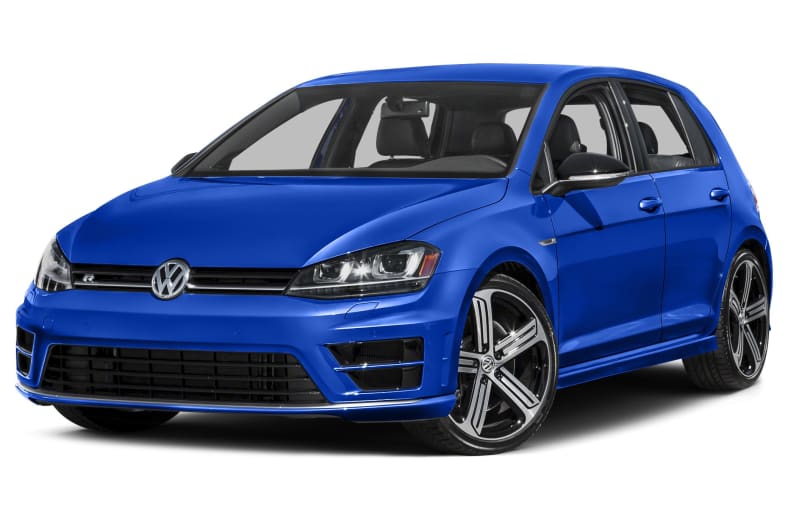 Even with those big intakes and massive rims, it is very much a Golf.  While I personally like my cars to look as fast as they are, I have to respect the Golf R.  There is a massive market out there for people who like to quietly (style wise) fly by you on the freeway.

Still, the 2017 Golf R looks plenty aggressive.  The sharp slashes in the body work and slightly exaggerated intakes make for a mean face, especially on a hatchback.  The last thing you should do when talking about the Golf R, is write it off solely because it is a hatchback.  I’ve seen it time and time again that guys can’t get past the fact it is a hot hatch.  Until they drive it.

I bet you weren’t expect quad exhaust tips, were you?  The Golf R looks brilliant in person; I have to tell you.  It is very low and the stance compliments its lower ride height.  While you might think the four tips are kind of out of place on the Golf (you may or may not be right), it has the same allure as Audi’s S series cars.  You’ll notice that Audi’s sport series features nearly identical tips on their cars, which shouldn’t surprise you because VW owns Audi.  Other than that, the element makes for the classic “I’m fast, but I’m barely going to show you” scheme these German’s follow.

If you want a flashy and fast hatch, go for the Focus RS.

Every Volkswagen model shares in this simple and practical layout.  I love how simple everything is in here, and how easy it is to get used to and use.  We see this kind of layout across the entire Volkswagen lineup because it works so well.  The modern day technology is laid out plainly and again, without too much flash.

One thing I need to touch on is how incredibly well made the steering wheel is.  Even on the GTi the wheel is ergonomically perfect (a trait we see a lot on Audi’s as well).  The paddles aren’t huge or very prominent at all, but their action is sport on.  The transmission (on the DSG) shifts insanely fast and is just impossible to distinguish how quick it works.  Maybe I’m getting off topic, but man I love this thing.

The Golf R offers a number of different driving modes, one of which is “Individual” that allows you to make a custom set up for throttle, suspension, steering and front lighting.

The bolstering of the seats are great, and keep you snug.  Plus the gauges are accented in a trendy blue color!

If you want plain English, the 2017 Volkswagen Golf R is fast.  If you want a few more words, here you go:

The GTi is incredibly quick.  With 210 HP, 0-60 is done under six seconds.  Now for the Golf R with 292 horses under the hood, all wheel drive and 280 pound feet of torque, you can take off to sixty from a dead stop in 4.6 seconds.  That is a serious figure right there, and if you want more from a hot hatch I’m not sure how to make you happy.

There are two transmissions that can be paired to the 2.0 L turbo four.  A 6 speed manual transmission is standard while a 6 speed DSG is optional.

On top of all this, the 2017 Golf R is one of the safest cars on the road, earning a 5 star rating from the National Highway Traffic Safety Administration.  Which means you have a lower chance of dying should you find yourself in a crash with the ultimate Golf!

The 2017 Golf R is another chapter in the long history of the Golf family.  The most extreme version yet makes me really wonder how they get almost 300 HP out of a little 2.0 L four cylinder with a turbo strapped two it. The car has already been released in the UK.

Regardless of how they did it, the Golf R really turns up the heat on the hot hatch market.