BMW is one of the largest automotive giants out there.  I’m sure I’m not the first person to tell you that, but between BMW, Rolls Royce and Mini, they have a strong umbrella.

BMW make some incredibly ground-breaking vehicles, and have the legendary M division in their arsenal.

Over the years BMW has switched to electrically assisted steering and all sorts of technology to aid the driving experience.  This has been trying times for BMW and really the whole automotive industry, as we move toward more economical, green times.

Personally I don’t like all the green technology and talks of making full electric cars to take over the world.  While I do understand all the great reasoning behind it, I want to hold onto my big V8’s and V12’s as long as possible.  Even while there are Ferrari’s that are less quick than a Tesla, I’d take the Ferrari any day.

This electric sports car is one of the most talked about cars in a very long time.  And rightfully so.  It is really the first trek in the world to combine a sports car and an electric hybrid.  Combining a Prius and an M4 or an M6.

With that, there are an endless array of drawbacks and advantages that the 2017 BMW i8 must go through.  So this is worth some exploration.

The 2017 BMW i8 is a pretty breathtaking spectacle.  Anywhere where you happen to find it, the BMW i8 seems to just look so futuristic and like a spaceship.

From the front, BMW added on their trademark kidney grilles, even though they are solely for show on this hybrid.

The front end is bony and beautifully athletic looking.  I love how futuristic and daring the BMW designers made the 2017 BMW i8’s front end.

The sports car silhouette continues into a beautifully sloped roof line that is super low and makes the car look super sleek.

From the side, you’ll also notice how the roof line kind of falls off the side of the car at the rear, and kind of comes together with the rear fender.  This bit of space in between the roof line and the fender creates a wind tunnel for air to pass through.  Aerodynamic trickery.

These aerodynamic tunnels continue into the rear to form the rear tail lights.

The rear end of the 2017 BMW i8 is unfortunately where I need to draw a line.  It looks more like a normal passenger car from the back.  Without those tail lights, the rear end is kind of stubby looking.  That, again, is the only issue I have with the exterior styling of the 2017 BMW i8.  Everything else is lovely.

Overall, the daring and stylish design of the 2017 BMW i8 is absolutely stunning.  It looks like a proper futuristic sports-car-half-super-car.  Plus, BMW is making the i8 Spyder soon… 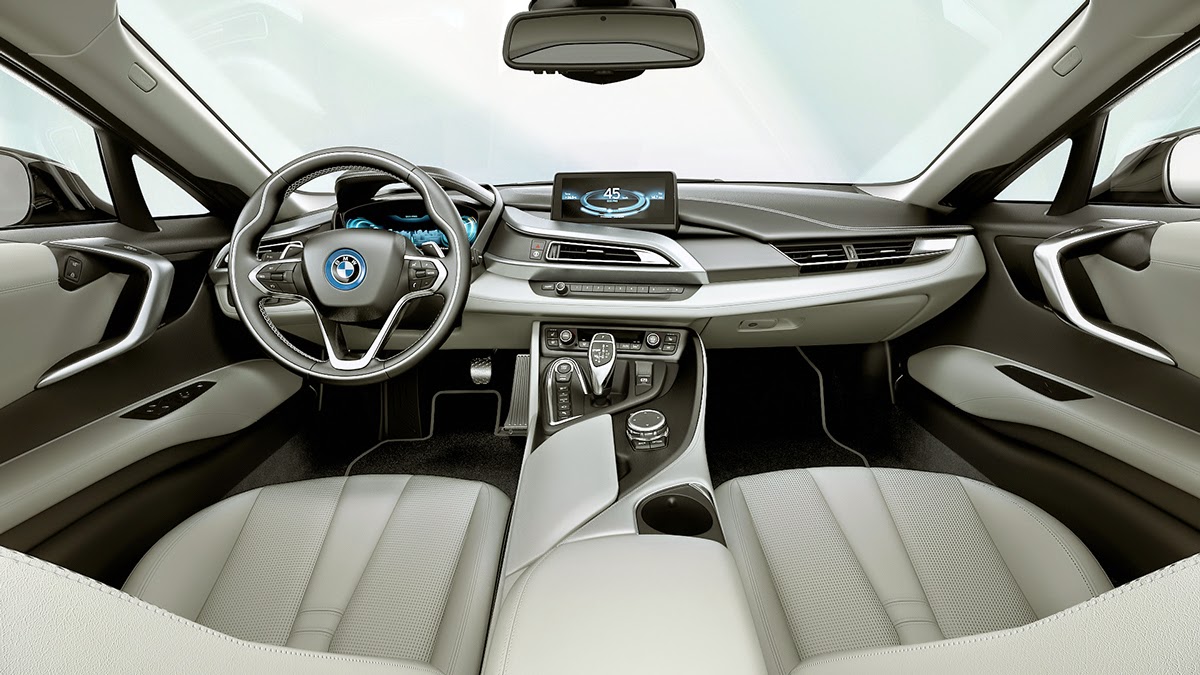 I tried to think of more articulate ways to say it, but the interior of the 2017 BMW i8 is just nuts.

A ton of concept cars come out every single year with crazy looking interiors and of course, none of them actually turn out to look like their concepts when they enter production.  That’s where the 2017 BMW i8 is different from everyone else.

Immediately looking at the interior  of the i8 begs you to open your eyes and gasp.  The materials, swooping design, crazy layout; It is all beautiful.

BMW features their latest i-Drive system in here as well.  You can control every bit of the cars behavior through all sorts of computers in here, and it all makes the experience more like a space ship.

The instrument cluster is completely digital to accommodate the different displays that can pop up.  From a red display for Sport mode to all sorts of eco stuff when you drive with just the batteries.

There are some things on the inside that are a bit normal.  Such as the familiar iDrive system, laptop screen on the dash and a shifter we see in many other BMW models.

The interior of the 2017 BMW i8 is very impressive.  Mainly because it doesn’t look like any other BMW model.  One con in here is that the windows don’t roll down all the way.  But I’m sure you can get over that.

Now, something I can’t forgive is the fact that the BMW i8 produces a fake engine noise.  What that means is when you’re driving along, the speakers in the cabin produce a recorded V8 engine sound that isn’t actually there.  I could make an entire separate article about why that’s an issue.

There are a total of four power plants at work for the 2017 BMW i8.  Two electric motors up front, a motor in the back, and a small 1.5 L three cylinder engine in the back of the car as well.

The 2017 BMW i8 weighs almost 3,500 pounds which means it is heavy, but BMW also knows how to engineer cars.

The driving experience is very interesting.  You don’t feel the weight of the car, and 350 HP means you can go from 0-60 in as little as 4.4 seconds.  Proper sports car territory.

In eco mode, the car is front wheel drive with two electric motors up front and a 2-speed transmission.  In fact, the 2017 BMW i8 is FWD, RWD, and AWD.  How cool is that?

The 2017 BMW i8 is a step toward the future.  Does that mean the classic, loud engines are dying out?  No one knows for sure.  But the i8, even with its fake engine sound, is a brilliant car.